Note: The new version of ELB’s site will be available in the coming days! Please excuse any site outages and enjoy the below Weekly Highlights. Questions or requests? claudia.espinosa@energylatamblog.com

This week, ENI became the first oil major to sign a profit-sharing contract in Mexico. ENI México S. de R.L. (Spanish) won the rights in an auction earlier this Fall and offered the Mexican government 83.75% of the operating profit (English) from the Amoca, Tecoalli, and Miztón fields. The fields contain light crude and gas.

Despite the pre-Thanksgiving downgrade to its Moody’s credit rating, Pemex did not endure any strong market reaction to the anticipated change. Like similar oil companies, Pemex is struggling (Spanish) with persistently low oil prices, excessive debt, and decreasing oil production. However, Pemex is repositioning itself with the goal of increasing competitiveness using a number of measures (English) over the coming years. Since it is state owned, it is still expected to provide approximately 20% of the Mexican federal budget in the short term.

The worst labor strike at Petrobras in recent history ended last week when more resistant unions returned to work (Portuguese). Per Petrobras, business and production are returning to normal, and the company expects to reach its daily production targets (English) for 2015.

More recently, Petrobras’ Chairman, Murilo Ferreira, stepped down (Portuguese). Though he did not provide an explanation, he was known to have differences with other members of leadership regarding strategies for Petrobras to improve its financial situation and competitiveness.

On the 22nd of November, Argentine voters chose Mauricio Macri to be their next president. While Macri is considered significantly more business-friendly than his predecessor, improving national governance (Spanish) and the country’s reputation abroad (English) are expected to be major challenges. While not expecting as much political theater as in the past, observers caution that expectations for improvement in any arena should be tempered and long-term in nature.

As Energy Minister, Macri has selected Juan Jose Aranguren, ex-CEO of Shell Argentina. Aranguren has indicated that the only significant change (English) that will take place at YPF, the majority state owned entity is an increase in efficiency. In a joint venture with Chevron, YPF is developing the significant Vaca Muerta shale basin. Another company with a stake in Vaca Muerta is Madalena Energy (English), an oil and gas firm that recently began trading on the OTC Market in the U.S. Overall, the business community sees potential for increased development (English) of Vaca Muerta once the Macri administration implements the more cooperative investment and business policies promised during his campaign.

Ecopetrol recently named (English) a new Executive Vice President and Corporate Internal Audit Director. In addition, the Colombian government moved to increased transparency and decrease bias by removing its ministers (English)from Ecopetrol’s board. The company is Colombia’s largest natural gas producer, but due to climate change and declining reserves, the country will have to import natural gas (English). However, Ecopetrol’s ultra modern refinery near Cartagena, Reficar (English), is widely expected to be a game changer once it is fully operational in 2016.

Image of the Week

As ELB continues its mountain theme, I include an extra trivia challenge: two of the tallest peaks in Colombia. These mountains reach approximately 5,775 meters (18,497 feet), and like competitive brothers, they are named for important historical figures. Any guesses? 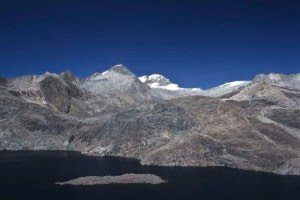